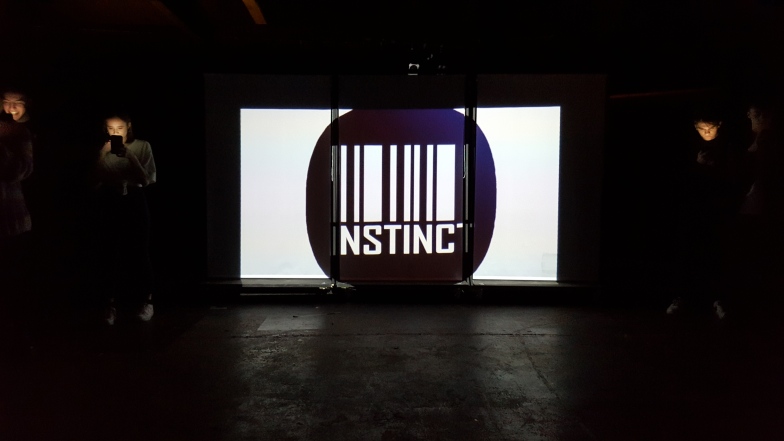 “Instinct: a new phone app that captures your reactions to the world around you, right there in the moment. A competition to find the ‘Face of Instinct’ has taken the social media universe by storm… but two teenage girls have their friendship tested to the limit by the frenzy that follows.” (Text from ‘The Television Workshop’ webpage promoting ‘Instinct’).

The design for the final logo was inspired by the facial recognition feature of the ‘app’. In order to log into ‘Instinct’, users had to first look to the left, then to the right, before finally facing forward. The image of a bar code was indicative of the ‘swiping’ action of the users face when logging into the ‘app’. The shape of the bar code also resembled the bars of a cage, or cell, echoing the notion of the user’s identity now belonging to the app, with the resulting isolation and detachment effectively rendering them prisoners to their situation. The logo design featuring a girl’s face behind the bars (top left image), added further weight to this concept.

Once I had analysed the story’s key themes, the resulting final design consisted of a series of individual window frames, with both roller and Venetian blinds being used separately.

The image of a blind, not only suggested the concept of shutting out the outside world, but it also highlighted the resolution and obsession of the characters to remain detached from it. It is within their power to open the blinds and reach out to others, however, it is their deliberate choice to remain secluded, shut off from each other and the community.

The shape of the frames also resembled a type of blockade to the characters. Relationships within the play are severed, and those trying to mend relationships are met with disinterest.
Masks also feature prominently throughout the play, in several guises. The blinds could also been interpreted as a filter, another type of mask for the characters and their situations. 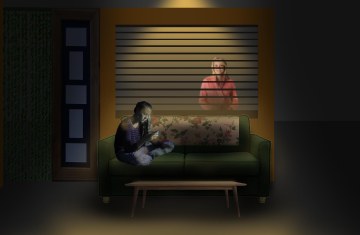 For example, Scene 3 tells the story of a woman who is irritated with her co-worker. The colour scripts enabled me to focus on this element by creating a close-up shot of her face, while her colleague is depicted in silhouette.